Holidays are often the highlight of the year for many people.

People save all year for those days in the sun in order to get away from it all. This year, however, many people’s plans have been thrown into doubt by the huge backlog at the Passport office – you will have seen the furore over the delays reported in this paper and I’ve certainly had many constituents come to me with travel plans potentially disrupted.

Like the Newport family that received their passport by special courier four hours before they flew to Greece after my office asked the Minister’s office for a last minute intervention.

The man in charge of the Passport Service has said sorry to customers, but Ministers should at least acknowledge that some of the decisions made over the last few years have led to the backlog and the resulting chaos.

The South Wales Argus, Paul Flynn and I warned this could happen when they took 150 processing jobs away from Newport -; don’t forget the Coalition’s original plans were to close the office entirely.

In April 2012, barely four months after those jobs were lost, the Passport Service was trying to recruit new staff elsewhere. It was immediately clear they had made the wrong decision. But it is no consolation to those who lost their jobs that we were proved right.

The Welsh Affairs select committee warned in its report that “the Newport Passport Office has a reputation for excellent customer care. The closure of the application processing centre would result in the loss to the service of skilled people with significant experience”.

The report called for the Government to “guarantee the same level of service will continue to be provided” – clearly this has not happened.

I do not understand why the current delays have come as a surprise to the Home Office -; the signs have been there for years, but they continued with their cuts and paid little regard to the affect it has had on customer service and staff -; who do a great job in Newport and are under immense stress.

That is why I have called for the Coalition Government, as they try and solve the problem, to restore those 150 jobs we lost back into Newport and to properly compensate those customers who are out of pocket through no fault of their own.

It’s good to see things are moving quickly on the Friars Walk development. I was lucky enough to be given an opportunity to have a bird’s eye view of the work from the sixth floor of Chartists Tower and to see the steel frames for Debenhams starting to go up next week. 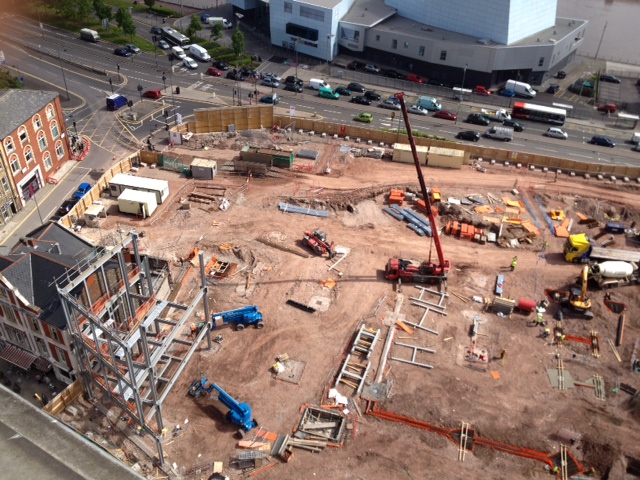 It’s worth reiterating that this is one of the few developments of its type underway in the UK at the moment. We all know the importance of the redevelopment for Newport and it is pleasing to see that the city council’s plans are now well on the way to becoming a reality.