On Tuesday Jessica and Paul Flynn MP had the opportunity to raise the issue of jobs in the Ministry of Justice Shared Services.  The article is the South Wales Argus covered the exchanges. 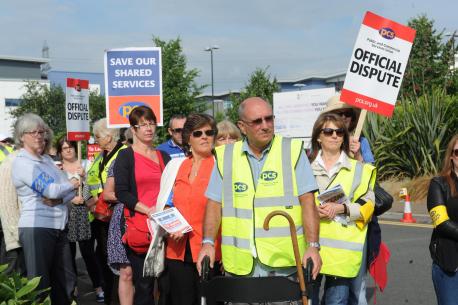 Ministry of Justice workers at a picket line protest about possible job losses.

TTHE day after 1,000 Ministry of Justice workers took strike action against a potential government privatisation plan, Gwent MPs challenged the Secretary of State for Justice to safeguard their jobs, which threaten to be off-shored.

Staff at the Ministry of Justice (MOJ) Shared Service centre at Celtic Springs Business Park were told last week their jobs could be privatised if a deal is done with French outsourcing company Steria in August.

In Parliament yesterday, Paul Flynn, Labour MP for Newport West, asked the minister what assessment had been made of the effect on Newport jobs if the shared services were privatised.

The Secretary of State for Justice, Chris Grayling, said: “The Ministry of Justice is entering into discussions with Shared Services Connected Ltd regarding future delivery of its back office administration services.

“Subject to contract, the majority of Ministry of Justice shared services staff, including those at Newport, will transfer to SSCL. Their jobs will be protected in their current location for at least 12 months from the date of transfer, expected to be in mid-October 2014.”

To this, Mr Flynn said: “Shared services in Newport have been a brilliant success, saving at least £10 million a year for the country. Steria has wasted £56 million. Are my constituents right to go on strike and feel anger against an ingrate Government who reward failure and punish success?”

Mr Grayling said: “Let me say to […] those staff in Newport, who have done a good job for us and will continue to do a good job: the reality is that we are having to take difficult decisions.”

Conservative MP for Monmouth, David Davies asked the minister to confirm there would be “absolutely no off-shoring of jobs”, to which Mr Grayling said: “I’m on record in my previous job for saying I do not want departments I run to offshore UK jobs. My position on that has not changed.”

Newport East MP Jessica Morden was also in the Commons and asked Mr Grayling to confirm the Ministry of Justice would not be giving any agreement to allow for the off-shoring of work.

Mr Grayling again reiterated that his position on off-shoring jobs had not changed.