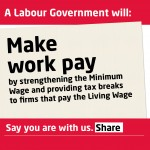 Long term youth unemployment has soared under the Tories, costing tax payers over £300 million a year.

At the same time low paid and insecure work is leaving more people reliant on benefits to help pay their bills. Under the Tories we’ve seen record numbers of people who can’t get the hours or work they want, costing the country over £1 billion a year in benefits.

Meanwhile Nick Clegg has been too weak to stand up to David Cameron and has backed the Tories failed approach all the way. As for UKIP they want to abolish your rights as a worker, including parental leave, maternity pay, holiday pay, sick pay, and even redundancy pay.

In the Labour Party we’re determined to do something about the problem. We will:

 Make sure that unemployed young people who don’t have the skills they need to get a job are in training, not on benefits