Standing up for Steel in House of Commons 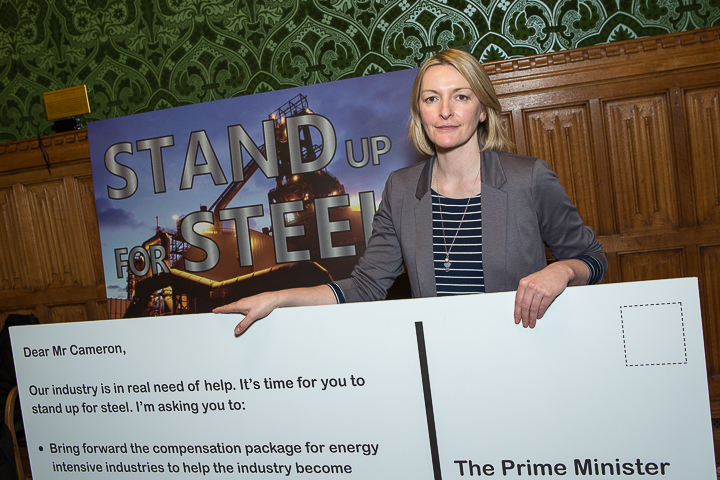 Yesterday I had the chance to speak in the debate on UK Steel called by the Labour Party. I have copied my speech below and also a link to the full debate for those who would like to read it.

Jessica Morden (Newport East) (Lab): I start by saying how important it is that the Labour party has chosen to use one of its Opposition days to debate issues affecting the steel industry, which is very important for my constituency. That, combined today with the launch of the Community union’s stand up for steel campaign, provides an extremely welcome focus on an industry that, as the Secretary of State said earlier, is still experiencing extremely challenging times, which put at risk not only the contribution that the steel industry makes to the UK today, but the role that it can play in the future as we transition to a low carbon economy. This is an industry that continues to improve its processes to be more efficient in production and can provide the steel for vital renewable energy production, and is, in itself, infinitely recyclable.

I know that the Government have argued that they are addressing some of the issues around competitiveness, but I am clear from visiting those businesses in my constituency that they have done everything they can to weather the storm, but the environment remains challenging. We need the issues raised today to remain a focus for this Government, with no complacency and real action to support and promote UK steel.

I have in my constituency Llanwern and Orb, which are owned by Tata, and BRC in Lliswerry, which is part of the Celsa group. As my hon. Friend the Member for Motherwell and Wishaw (Mr Roy) said, we should pay a big tribute to those work forces working alongside their union, Community, who, as we have said in previous debates, have had to face hard decisions over recent years. They have had to adapt, accept changes and rise to the challenge of the targets that companies have set them. As Community union says, we have the best steelworkers in the world. To support them and the steel companies, we need this Government now to implement measures, as we have heard, to alleviate their energy costs and business rates, which are undermining the competitiveness of the UK steel industry and denying us a level playing field with our competitors. We also need a more robust approach to procurement for major investment projects and a more holistic look at supply chain strategies.

Llanwern in my constituency is a swing plant and a significant energy user. Unfortunately, it does not have the same ability as, say, Port Talbot to recycle energy for electricity generation. Energy costs for that plant are particularly crucial. We know that the Chancellor announced a compensation package for the renewables obligation in the 2014 Budget but, as was said earlier, that is not scheduled to come into force until April 2016. This puts huge pressure on UK-based steel producers in the interim period. That will cost Llanwern more than £4 million per annum, going up to £5 million with the tax increases in April. This is a large sum, which our competitors in France and Germany, for example, do not pay or pay at a far lower rate.

On business rates, I understand that some plants in my constituency pay five to six times the amount that equivalent sites in continental Europe pay. There is a difference of millions of pounds. Every time they invest in new plant machinery, their bill goes up. That is bad for competing and bad for attracting investment. The Government have been lobbied to remove plant and machinery from the business rate valuation; it would be useful to hear their response.

We welcome the review of business rates announced by the Chancellor, but it is too slow. The industry is struggling now, and as an employee at Llanwern said to me this week, “Llanwern needs help now, not over a period of years. We are a good plant that, if given an even playing field, could be one of the best producers of pickle and oil, and that would also support our Zodiac, which is one of the best in the world, not just Europe.”

I agree with all the points made on infrastructure, which would help sites such as Llanwern, Orb and BRC, as would a robust approach to considering local economic benefit, such as jobs and apprenticeships. I agree, too, with the comments on Chinese and Turkish imports, which will no doubt be raised by my hon. Friend the Member for Cardiff South and Penarth (Stephen Doughty), and which affect BRC in Newport as well.

As my right hon. Friend the Member for Wentworth and Dearne (John Healey) said, this year is a big year for UK steel. Steelworkers in my communities need to know that the Government are prepared to intervene to support us on energy, tax and procurement, as Governments do in other countries.