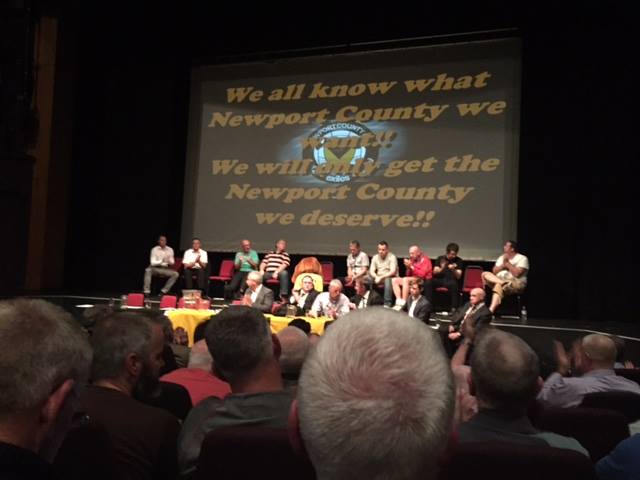 Last week I attended the launch of the Newport County Supporter’s trust share launch at the Riverfront Theatre.  I joined the Supporter’s Trust as I believe the future of Newport County is important for the City, as well as the thousands of supporters. In my constituency of Newport East I meet County fans in Caldicot and Rogiet, as well as Ringland, Lliswerry and St Julians. I have pledged to buy some shares.  If you want to get involved too, you can find details via this link  http://www.ncafctrust.org/join.phps

I asked a long time supporter what Newport County meant to him.  I wanted to share his thoughts with you.

“It’s great to see so many people wanting to play a part in a new, exciting future for Newport County.  Accrington Stanley FC label themselves as ‘the club that wouldn’t die’, but you could argue just as easily apply that description to Newport County. It’s brilliant that Newport has a Football League club again, but that has been only been possible because of the dedication of loyal supporters over the years -; often against the odds. Never was that more the case than in 1989, when a committed band of supporters pulled together to ensure that the old County could have a new lease of life. We are only able to have this meeting tonight because of their never-say-die attitude, which runs in the DNA of the football club.

There will undoubtedly be speed-bumps ahead, but that’s nothing new for Newport County. This is a club that in the last 26 years alone has gone into exile over the border (twice), fought and won legal battles against football authorities, and scrapped its way through the doldrums of non-league football and back to the promised land of the Football League. If there are challenges ahead, this club -; with our support and backing -; will be ready for them..

Newport County is a special club. County are not the richest, most decorated or most fashionable team in the country, but this is a football club that means a great deal to a lot of people; not just here in Newport, but across Gwent. The ‘County’ part of the Newport County name is pivotal -; this is a football club for our city, and also for the wider region. If we all pull together to back the club, County will all be the stronger for it.

The share launch tonight is important -; let’s remember that it wasn’t all that long ago that Swansea City fans were having similar meetings and discussions, and look where they are now. With that being said, the aim of this isn’t getting Newport County into the Premier League -; although I doubt any of us would turn down the chance to see Arsenal, Liverpool, Man Utd or Chelsea at Rodney Parade! Tonight is about taking the first steps down the road to ensuring a stable, healthy and sustainable long-term future for the club. That’s what we all want to see, and something I know we’re all keen to support. Up the County!”