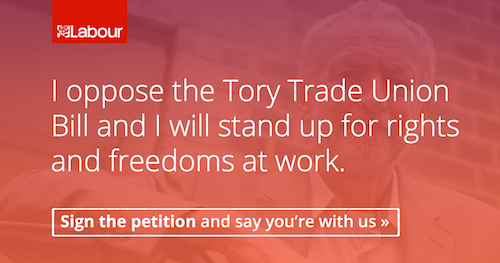 Last night I voted against the Government Trade Union Bill. These are some of my reasons why I and the Labour Party are opposed to this bill:

The Bill is piece of legislation which has been described as the biggest crackdown on Trade Union Rights for 30 years and will, if the Government succeed, attack the rights of working people to have their say on their terms and conditions. Included in the Bill are measures to permit employers to hire strike-breaking agency staff and in…troduce the requirement for a 50% turnout in ballots – a criteria rarely used anywhere else in our democracy, not even in the recent Alternative Vote Referendum or the Police and Crime Commissioner elections where we saw turnouts of 42% and 14.34%. Changes to political funding could also inhibit worthwhile campaigns like USDAW’s “Freedom from Fear” campaign, which protects shop workers from violence- an initiative I have always been keen to support in our constituency.

The truth is that strikes are at historically low levels. According to the House of Commons Library there were more days lost to disputes in 1926 than in the 40 years covering 1974 -; 2014.

And in the public sector, the Government’s plans look nothing more than a partisan attempt to stifle criticism of Tory attacks on workers such as nurses, firefighters and midwives. It’s worth remembering it was a union-led campaign, supported by the workforce and backed by the Argus and politicians, that forced the Government to change their mind on the Newport Passport Office closure.