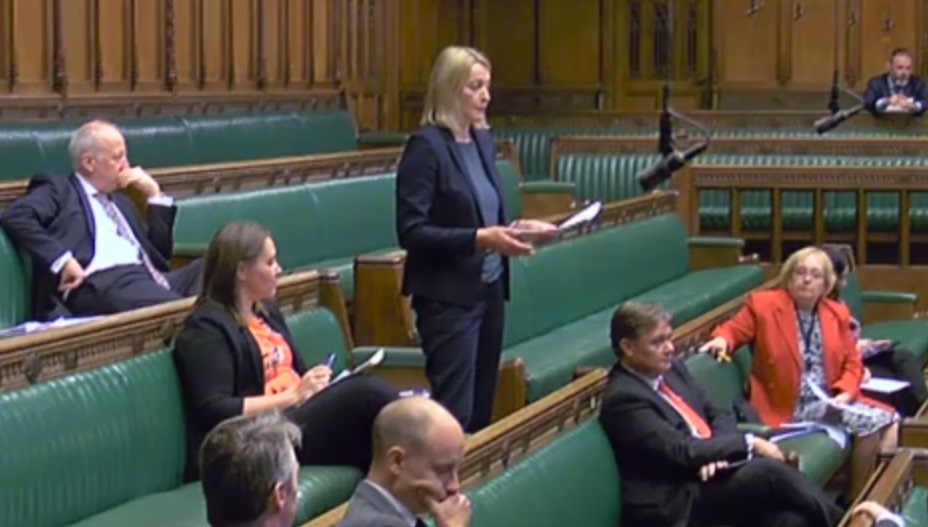 Today Members of Parliament came together to call for a summit on steel.  I was able to speak in that debate to put the case for action and why it is so important for Newport to support the steel industry. The Minister agreed to a summit and once I know more I will let people know.  A copy of my speech is below:

My hon. Friend the Member for Middlesbrough South and East Cleveland (Tom Blenkinsop) is an incredibly hard act to follow. The messages that he sent were spot on, he spoke from the heart, and he was right to say that this issue demands the Prime Minister’s attention.

All credit is due to my hon. Friend the Member for Redcar (Anna Turley) for securing the debate, for her excellent, impassioned speech, and for the clear messages that she sent to the Government. Credit is also due to the Backbench Business Committee for appreciating the huge urgency of the situation in steel manufacturing and giving us time for today’s debate. I echo the sentiments expressed by my hon. Friend the Member for Hartlepool (Mr Wright) about the central role that steel plays in our modern economy, and I wholeheartedly support the motion’s call for an urgent steel summit, because this is a critical year for the steel industry.

My hon. Friend the Member for Middlesbrough South and East Cleveland rightly spoke about the situation in Redcar. I obviously want to focus on the impact on Tata’s Llanwern steelworks, which is in my constituency-as is Orb steelworks, which has also been hit by some of these challenges. The current press coverage has focused on the huge challenges that the changes in the steel market are posing for SSI, but Llanwern is already having to react to the same massive headwinds. On 26 August, Tata announced its intention to lose about 250 jobs there, and to mothball the hot strip mill. By the end of October, we shall see that happen. It is the third time the mill has been mothballed since 2009, but this mothballing includes, for instance, the cold mill and one of the pickle lines, and the tonnage of the remaining pickle line is being reduced.

As the Minister will appreciate, the news of the latest mothballing is devastating for workers and their families, and for the confidence of the city, which, like other Members’ constituencies, has a proud tradition of steelmaking. Tata has confirmed its intention of redeploying permanent employees, but 176 contractors and agency staff may lose their jobs, and 81 Tata employees may have to move to another area for work. Anyone who talks to steelworkers cannot fail to sense their uncertainty about the future. Moreover, as others have pointed out, for every steel job, a further two to three jobs in the wider community rely on the metals sector.

Following the announcement, I met representatives of the unions and Tata’s management, and was given an in-depth presentation by Tata’s UK director of strip products. I agree with other Members that no one who sees the figures and observes the situation can fail to be convinced of the need for Government action now, and of just how hard times are. The industry is at an historic crossroads, and what the Government do now will determine whether UK steel has a sustainable future.

All the key arguments that have been made repeatedly by other Members-I suspect that we shall all be singing from the same hymn sheet today-apply equally to Llanwern. European steel demand is still 25% below 2008 levels. The market is being flooded by cheap Chinese imports, because of China’s overcapacity and rising protectionism in other countries. Energy prices for UK steel producers are more than 50% higher than those paid by our main European competitors, which are not experiencing the same cost pressures and are not awaiting decisions on state aid. The package for energy-intensive industries that the Chancellor announced in March is still being held up. UK business rates are up to five times higher than those of our European competitors, and the Government’s business rates review is holding up change. Other Members have made good points about the disincentives to investment. Tata UK’s latest accounts show that losses have doubled since last year.

As Community has said, we need the Government to be quick and bold. Steelworkers want to know why they are still allowing cheap Chinese steel to flood the market at a time of rising protectionism elsewhere in the world. Llanwern has been hit by the strong action taken by the United States in defence of its steel market. Its workers are asking why other countries can make quick and decisive decisions and we cannot do the same here.

I welcomed the recent visit by the Secretary of State for Wales and the Minister to Port Talbot, and I know that they will have heard these messages. As others have said, the Minister has been very constructive, and I know that she will be in no doubt about the challenges faced by the industry and the people who depend on it for their livelihood. Following that meeting, however, steelworkers at Llanwern want to know what practical steps the Minister has promised to take, and to remember them and include them in the support that she offers. I agree with my hon. Friend the Member for Redcar that a good start would be an urgent summit, but we also need urgent action, and we need to discuss options for assistance.

It is imperative for any summit to be held quickly, with full and positive backing. There must be Government support, and the unions, the industry and Members whose constituencies are affected must work together for a common cause. During my years as Member of Parliament for Newport East, I have been acutely aware of the many challenges facing steelworkers in Llanwern. They have had to adapt constantly, accepting changes in their terms and conditions and rising to the challenge of hitting the targets that companies have set them in difficult times. Support for the industry is crucial for people who, in constituencies such as mine, have worked so hard during those difficult times to be constructive and help the company along.

I know that it is easy to talk theoretically about China, state aid rules, and “all possible help being given”, but the reality is that 176 contractors in my constituency are being laid off, and more of my constituents face the upheaval of being redeployed to other Tata sites. That is not theory or speculation; it is real, and it is happening now. Any action that the Government can take-such as accelerating the reform of business rates for manufacturers, putting pressure on the European Commission to grant state aid approval for energy cost mitigations and introducing them immediately, and ensuring that UK-made steel is integrated proactively with industry and infrastructure projects-could make a real difference, although we all appreciate that the global challenges are massive.

Some of the best steel in the world is made at Llanwern. Let us recognise that, champion Llanwern, and not stand aside and watch jobs, investment and innovation go elsewhere.