Jeremy Corbyn, Labour’s new Leader, today said that it’s time for grown-up politics as he set out how Labour will build a better, more caring and prosperous society based on the values of decency, justice and equality. We are building a new politics that involves real debate. A vision rooted in British values and committed to mutual respect.  He talked of how Labour can provide a real alternative to the Tories’ failed austerity, by investing for the future and giving economic security to families -; campaigning against tax credit cuts, and looking at new ways to support Britain’s growing number of self-employed people. 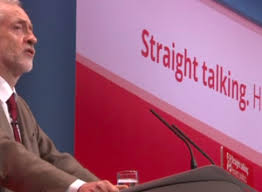 Jeremy Corbyn’s speech today showed that he is committed to a new way of doing politics.

“I am not imposing leadership lines. I don’t believe anyone has a monopoly on wisdom and ideas -; we all have ideas and a vision of how things can be better. I want open debate. I will listen to everyone. I firmly believe leadership is listening. We will reach out to our new members and supporters. Involve people in our debates on policy and then our Party as a whole will decide.

“The huge mandate I have been given, by the 59% of our electorate who supported my campaign, is a mandate for change. First and foremost it was a vote for change in the way we do politics. In the Labour Party and in the country. Kinder, more inclusive. Bottom up, not top down.  In every community and workplace, not just at Westminster. Real debate, not message discipline. Straight talking. Honest.”

“Let me be clear under my leadership Labour will be challenging austerity. It will be unapologetic about reforming our economy to challenge inequality and protect workers better. And internationally Labour will be a voice for engagement in partnership with those who share our values. Supporting the authority of international law and international institutions, not acting against them.”

…And that the test the Labour Party faces now is to win elections everywhere in the country, starting next year.

“Opposing and fighting the Tory government and the huge damage it is doing. Developing Labour’s alternative. Renewing our policies so we can reach out across the country and win. Starting next year. In Wales. In Scotland. In London. In Bristol. Across Britain.”

He talked about his own background as a campaigning backbench MP for over 30 years, and showed that as Leader he will continue to stand up for the causes he believes in -; so he used his speech to call on David Cameron to intervene personally with the Saudi Arabian regime to stop the beheading and crucifixion of Saudi teenager Ali Mohammed al-Nimr.

“I’ve been standing up for human rights, challenging oppressive regimes for 30 years as a backbench MP, and before that as an individual activist like everyone else in this hall. I’m not going to stop now I’m leader of this party.

“So to David Cameron I say: Intervene personally with the Saudi Arabian regime to stop the beheading and crucifixion of Ali Mohammed al-Nimr for taking part in a demonstration when just 17 years old. And start by terminating the Ministry of Justice’s bid to provide services to the Saudi prisons service -; the very body which would be responsible for carrying out this barbaric sentence. This is the kind of thing that really damages Britain’s standing in the world.”

He talked about his love for our country, and the British values that inspire him and inspire the Labour Party to change Britain for the better

“It is this sense of fair play, these shared majority British values that are the fundamental reason why I love this country and its people. These values are what I was elected on: a kinder politics and a more caring society. They are Labour values and our country’s values. We’re going to put these values back into politics.

“It’s because I am driven by these British majority values, because I love this country that I want to rid it of injustice, to make it fairer, more decent, more equal. And I want all our citizens to benefit from prosperity and success.”

And he said that as we put forward our vision for a better society, we need to treat people with respect, and cut out personal abuse.

“There’s another important thing about how we are going to do this. It’s a vital part of our new politics. I want to repeat what I said at the start of the leadership election. I do not believe in personal abuse of any sort. Treat people with respect. Treat people as you wish to be treated yourself. Listen to their views, agree or disagree but have that debate. There is going to be no rudeness from me.”

“It hasn’t been growing exports and a stronger manufacturing sector that have underpinned the feeble economic recovery. It’s house price inflation, asset inflation, more private debt. Unbalanced. Unsustainable. Dangerous. The real risk to economic and family security. To people who have had to stretch to take on mortgages. To people who have only kept their families afloat through relying on their credit cards, and payday loans. Fearful of how they will cope with a rise in interest rates. It’s not acceptable. The Tories’ austerity is the out-dated and failed approach of the past.”

And he showed how Labour can develop an alternative based on investing for the future.

“Every mainstream economist will tell you that with interest rates so low now is the time for public investment in our infrastructure. Investment in council housing, and for affordable homes to rent and to buy. John Healey’s plan for 100,000 new council and housing association homes a year. To tackle the housing crisis, drive down the spiralling housing benefit bill and so make the taxpayer a profit. Investment in fast broadband to support new high technology job. A National Investment Bank to support investment in infrastructure. To provide finance to small and medium sized firms that our banks continue to starve of the money they need to grow. A Green New Deal investing in renewable energy and energy conservation to tackle the threat of climate change. This is the only way to a strong economic future for Britain. That’s sustainable. That turns round the terrible trade deficit. That supports high growth firms and businesses. That provides real economic security for our people.”

He announced that Labour will campaign against David Cameron’s cuts to the tax credits that families rely on.

And he announced that Labour’s policy review will look at ways to help Britain’s growing number of self-employed people by ensuring they can get Statutory Maternity and Paternity Pay like other workers.

“So that are the Tories doing to help the self-employed, the entrepreneurs they claim to represent? They’re clobbering them with the tax credit cuts. And they are going to clobber them again harder as they bring in Universal Credit. So I want our policy review to tackle this in a really serious way. Labour created the welfare state as an expression of a caring society -; but all too often that safety net is not there for self-employed people. It must be. Consider opening up Statutory Maternity and Paternity Pay to the self-employed so all new born children can get the same level of care from their parents.”