In a speech at the Welsh Labour Conference the First Minister, Carwyn Jones AM, announced Welsh Labour’s six new promises for the Assembly Elections. 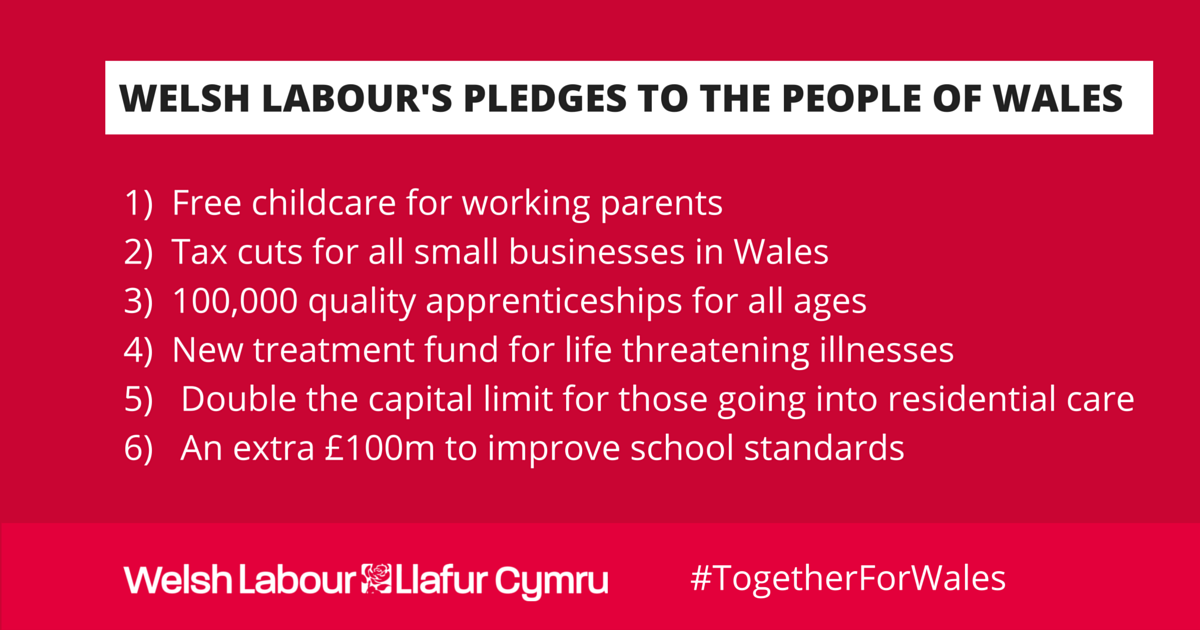 Extract of the speech Carwyn Jones AM gave explaining the pledges

30 hours of free childcare for working parents -; covering not just 38 weeks of the year as elsewhere in the UK, but 48 weeks’ worth of care for 3 and 4 year olds. Our commitment doesn’t centre on what Government wants to deliver -; it centres on what parents actually need.

This will supplement the Flying Start scheme we already have in place in our most disadvantaged communities. This is an investment not just in working families, our children’s future -; but in our economy too.

We know how hard it is for so many working mothers in particular to get back to work and today’s commitment will make family life that much easier.

With Welsh Labour, Wales can have the most ambitious, most comprehensive childcare offer in the UK. That’s something to fight for.

Last year Wales recorded our best ever GCSE results. Thanks to our Schools Challenge Cymru programme, some of our most challenged schools reported increases of over 10% on their good GCSE results. But, when it comes to our children, we can’t ever be too ambitious.

And so we commit to establishing a £100m schools standards fund to improve still further on the results our pupils and teachers are achieving, together.

With Welsh Labour, we can prove that all schools can be good schools. That’s something to fight for.

And when people finish their education, they have a right to a good job, with excellent training and good prospects. That is why a future Welsh Labour Government will pledge to fund 100,000 extra apprentices by the end of the next Assembly.

This scheme will be open to all ages -; that means everyone has the opportunity fulfil their potential in the workplace. As far as possible, we will meet that challenge of a good job, closer to home.

With Welsh Labour, good quality work and training. That’s something to fight for.

We know that small businesses are the lifeblood of our economy, and of our communities and high streets too. So we will give a tax-break to all small businesses in Wales using our new powers on business rates.

This will help three quarters of business premises in Wales and half of all eligible businesses will pay no business rates at all in the future.

The message we get from SMEs is for Government to keep it simple, and to let them get on with it. This level of support will do exactly that -; no red tape, no complicated forms -; just a helping hand in tough times.

With Welsh Labour, a business friendly government on your side. That’s something to fight for.

We will develop a new Treatment Fund in Wales to ensure that people suffering life-threatening conditions can have access to the latest medicine and treatment.

We know that new technology, medicines and treatments represent a serious challenge to NHS budgets, just as they also represent a new lifeline to seriously ill patients.

We know these treatments are being developed and tested on an almost weekly basis, and this dedicated central fund would enable the most advanced drugs and high cost treatments for life threatening illnesses to be available in Wales first. Not just for cancer, but other conditions such as cystic fibrosis and multiple sclerosis.

With Welsh Labour, an NHS that will stay free from privatisation, but keep pace with modernisation. That’s something to fight for.

Finally, we believe that people in old age who need extra help – those who have played fair and paid in -; they deserve a fairer deal. So we will double the capital limit they will be allowed to keep on the sale of their home should they need to go into care.

That’s £50,000 that people can now pass on to their family. They’ve earned it, they should be allowed to use it.

That is the kind of Wales I believe in.

Where those that put in a decent shift, get a fair deal.

Read more of the speech here