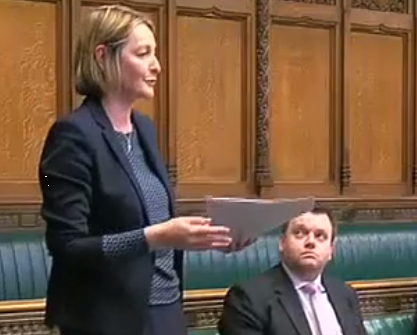 Yesterday the Speaker of the House of Commons agreed to a request from Labour MPs for an emergency debate on steel. Here is my contribution:

“We have two important debates this afternoon: this one on steel, and the debate later on the contaminated blood scandal. As a steel group member, I am incredibly pleased that my hon. Friend the Member for Wallasey (Ms Eagle) has been able to secure the debate. I gently reassure anyone who has come to lobby on the contaminated blood scandal that hon. Members will be here to speak for them in that debate later. It will be a very long day for those who have travelled from far and wide to get here. Both of the debates remind me of “Groundhog Day”, because we have to come back time and again to rehearse the same arguments and press for action.

Understandably, much of the focus has been on Port Talbot, and I praise my hon. Friend the Member for Aberavon (Stephen Kinnock) for his efforts with the steel unions. As has been said, however, this is a UK steel crisis. Steel making may have ceased in 2001 in Llanwern, but slab has been imported by rail from our sister plant in Port Talbot ever since. Our steelworkers are proud to roll UK steel, and they want to continue to do so. They are looking to the Government to ensure that happens.

At Llanwern, we have taken a cumulative hit over the last few years. Hundreds of jobs have been lost, to the point where we have 700 left. It has been painful. Many of the Llanwern steel workers have transferred to Port Talbot, and they now face uncertainty there. As my hon. Friend the Member for Penistone and Stocksbridge (Angela Smith) has said eloquently, steel could have a great future. At Llanwern, we have the Zodiac line, which is Tata Steel’s world-class coil galvanising line. The Zodiac line is doing well. Orb Electrical Steels, which produces a type of high-tech electrical steel, is in profit following a period of restructuring a few years ago. As is often said in debates such as this, steel is cyclical, and Orb demonstrates that. The order books are healthy.

We have had much in the way of warm words, with phrases such as “do all we can to help”-that has been said again today-but what do they mean in practical terms? The asks from the unions have been well rehearsed today, and I would like to add to them. The unions want fast action to protect the order books to ensure the businesses are saleable. It is crucial to the future of Llanwern and Orb that they are not undermined by seepage of business elsewhere before any sale or transferring of work. The unions want time for the sale, as my hon. Friend the Member for Middlesbrough South and East Cleveland (Tom Blenkinsop) has said. It is important to know the timescale. Long Products took nine months, and Tata appears to be saying four months. As the shadow Business Secretary has said, we need time for an appropriate consideration of offers. What is the news on the Secretary of State working with Tata to ensure that it is a responsible seller?

The asks from the steel industry in recent times have been for action on Chinese dumping, on which the Government have failed. They have also failed to act on the lesser duty rule. It is ironic that while our Government have been slow to act on tariffs to protect our industry, the Chinese Government have just imposed 46% tariffs on electrical steel. Although Orb no longer exports to China, companies in other countries do. They will be looking for alternative customers in other countries, and that could mean issues down the line for our electrical steel industry sales.

We have asked for action on energy prices. That took two years to deliver, and is only just coming through now. That is too slow. We need real action on procurement, not simply the souped-up advice note that came out last week. Will the Minister tell us today what specific projects he has in mind? The Welsh Government have done all they can to help with the levers that they have had at their disposal. That has included setting up the steel taskforce to work on practical ways to help. I know from my union reps who came here yesterday how much that relationship is valued.

References were made yesterday to grandstanding, and they have been repeated today. I assure hon. Members on both sides of the House that steel group members have raised issues to do with steel time and time again in the Chamber. It is not grandstanding; it is personal. It is personal because our constituents are loyal, resourceful, highly skilled and incredibly hard-working. We understand what they are going through in tough times. These are valued jobs.

Here is a link to a recording of my speech.