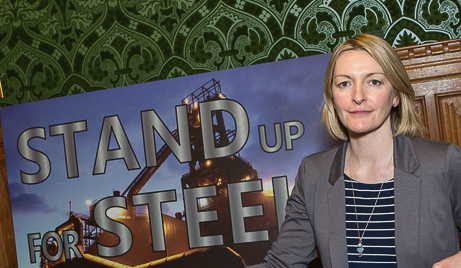 I welcome this week’s new report from All Party Parliamentary Group (APPG) on Steel containing key recommendations for securing a long-term future for the British steel industry, including in Newport. The report -; ‘Steel 2020: Forging a future for the British steel industry’ -; demands that the UK Government takes ‘urgent and strategic action’ to enable the industry to re-build and thrive, and to ensure that steel plays a central role in developing an industrial strategy for an expanded manufacturing base in the UK.

This is a wide-ranging report which offers a path towards a brighter future for the UK steel industry if imminent action is taken. While highlighting that steel industry in the UK remains in an increasingly precarious position, the report rightly emphasises that steel is not a ‘sunset industry’ and can actually play a key role at the frontline of innovation -; over two thirds of the steel we produce in the UK today did not exist a decade ago. I was delighted that the report identified the huge potential of cutting-edge steel work in Newport East at the Zodiac plant in Llanwern and the electric steels facility at Orb.

The economic costs of the loss of the British steel industry are far greater than the costs of investment. We need the UK Government to support the development of a more competitive environment for our steel industry before it is too late. Steelworkers in South Wales and across the UK are counting on them.

Key recommendations to the UK Government outlined in the report include:

– Asking Ministers to take urgent action to reduce the UK’s uncompetitive industrial energy costs;
– Calling for action against illegal steel dumping by China -; including through opposing any future attempts by China to secure Market Economy Status;
– Imploring Government to introduce stronger procurement rules to increase domestic steel content in manufacturing and construction;
– A call for greater investment in skills and research & development, with consideration given to a nationwide programme based on the Welsh Government’s ProAct scheme to provide wage subsidy support for the steel industry to help retain skilled staff;
– An emphasis on the need for greater worker and trade union representation on UK steel company boards, based on the relative success of this model in parts of Europe and the USA.

The report also highlights the crucial importance of the UK securing a constructive free trade deal with the EU after Brexit, given that the UK currently exports three times as much steel to other EU countries as it does to all other export markets put together.