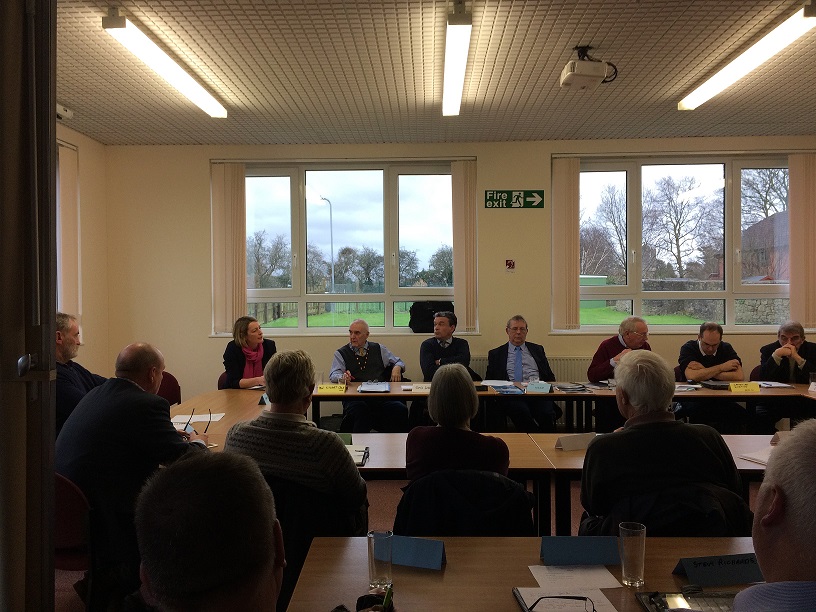 I was pleased to take part in aSevern Tunnel Action Group roundtable meeting in Caldicot last Friday to discuss the future of the Wales and Borders rail franchise, and the needs of commuters and communities in Newport, Monmouthshire and the Forest of Dean.

The new franchise -; currently run by Arriva Train Wales -; is nearing its end, with a new franchise due to be awarded in 2018 to one of four shortlisted bidders; Arriva, Abellio, Keolis or MTR. The successful bidder will be run the new franchise for 15 years, and will have responsibility for the incoming South Wales Metro system alongside Welsh Government.

The meeting offered stakeholders from Newport, Monmouthshire and the Forest of Dean an opportunity to discuss their key priorities for the new franchise, including improvements to stations, rolling stock and capacity. Among the wide range of stakeholders attending were representatives from the local branch of the RMT union, Monmouthshire County Council, the Forest of Dean District Council, Lydney Town Council, Magor with Undy Community Council, Severn Tunnel Action Group, and the Magor Action Group on Rail, as well as county councillors and local rail experts, including Professor Stuart Cole, Professor of Transport at the University of South Wales and Rowland Pittard of Rail Future Cymru.. Members of staff from the offices of David Davies MP (Monmouth) and Mark Harper MP (Forest of Dean) were also in attendance.

I’m very grateful to the Severn Tunnel Action Group for organising the meeting. It was good to have a variety of voices around the table to discuss what local communities are looking for from the new Wales and Borders franchise, and the importance of developing a joined-up approach to meet the needs of current and future stations on the railway line between Newport and Cheltenham. We discussed the need for continued improvements at Severn Tunnel Junction, Caldicot and Lydney stations, and the potential of a new station for Magor as part of the forthcoming Metro system. A key theme that emerged from discussions was the need to ensure that smaller stations don’t fall between the cracks in the midst of larger projects like electrification of the South Wales main line and the development of the Metro.

We also discussed the fact that -; despite the substantial growth of passenger numbers at local stations -; there is still a low frequency of services -; there are only 12 trains a day from Chepstow to Cardiff. Further to this, we also heard good contributions on freight, and the need for future service providers to develop increased freight transport between Newport, the Forest of Dean and further afield.

There was also agreement that we needed a strong local input into the Transport for Wales consultation on the Wales and Borders Franchise.

Speaking after the meeting, David Flint of the Severn Tunnel Action group said “We’d like to thank the Mayor of Caldicot and the Caldicot Town Council for the use of the Council Chamber for today’s meeting. A small committee representing Lydney, Chepstow, Caldicot and Severn Tunnel Junction stations will now be pulling together to develop all the thoughts expressed during the meeting  before reporting back. The aim is to jointly present these joint ideas and objectives to the franchise bidders, as well as to Transport for Wales and Welsh Government.”

Transport Focus are requesting that regular passengers on the Newport-Cheltenham line complete a passenger survey at: www.surveymonkey.co.uk/r/rail-metro