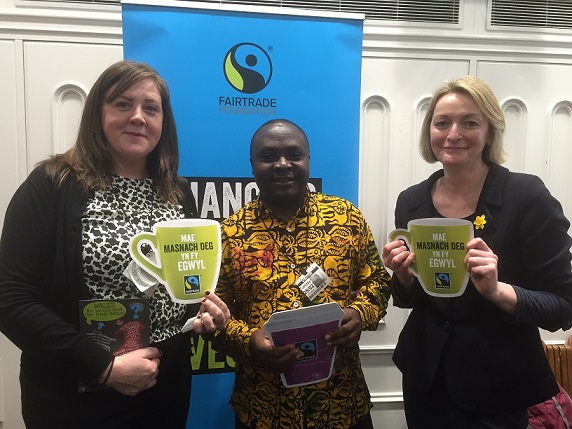 Earlier this week I met with Fairtrade Wales in Parliament to support Fairtrade Fortnight, which runs from 27th February to 12th March.

Fairtrade Fortnight has grown every year, and a number of groups across Newport and Monmouthshire will be marking the occasion with Fairtrade coffee mornings and community events, including at Caldicot Library next week and Capel Mynydd Seion in Newport on 11th March. I know that Fairtrade Wales are also visiting a number of local schools over the coming days, including Ysgol Gymraeg Casnewydd in Ringland, to talk to pupils about the vital role Fairtrade plays in supporting farming communities across the world to improve their working conditions and protect and sustain the environments they work in.

Fairtrade works to benefit millions of small-scale farmers and farm workers; enabling them to maintain their livelihoods and reach their potential. I’d encourage everyone to buy Fairtrade over the next fortnight and beyond -; it’s an important way to show our opposition to the exploitation of farm workers in the developing world, and a show of solidarity and support for labourers across the globe who grow and harvest the products we eat and drink.