Please find below a report of my work during February and March. Please get in touch if you have a case you wish me to raise or would like to let me know your views. Surgery dates are listed on my website www.jessicamorden.com and my contact details are listed below.  For updates on my work please follow me on twitter @jessicamordenmp or facebook.

On March 29th, a week on from the attack in Westminster, tributes were held for those who tragically lost their lives and were injured. Thousands of people of all faiths and backgrounds gathered where it happened to pay their respects, with Parliament Square and Westminster Bridge filled with flowers. Although Parliament and our democracy carries on, we will never forget those caught up in this tragic event including PC Keith Palmer. On behalf of constituents of Newport East, I passed on our condolences, thoughts and love through the books of remembrance placed in the Library of the House of Commons.

In February, Parliament voted to allow the Prime Minister to trigger Brexit.  The Bill was passed without Labour’s proposed amendments which would have ensured better scrutiny of the process, and the rights of EU nationals living in the UK.  As someone who campaigned to remain I supported these amendments, but in respecting the result of the referendum I also voted for the Government to be able to trigger the process which happened on the 29th March.  A white paper on the Great Repeal Bill was published on Thursday 30th March which you can read about here.  Labour’s Keir Starmer, Shadow Secretary of State for Exiting the European Union set out recently the key tests the Government will be judged on as they begin negotiations which you can read here.

The Spring Budget did little to help build a fair economy for all and deal with the living standards crisis.  An ill–thought–out National Insurance hike for the self-employed saw a quick U-turn that has left the Government with a £2bn blackhole in the public finances.  It was especially disappointing, with a budget that fell on International Women’s Day, that no help was forthcoming for the WASPI women, an issue I raised in the chamber.  There was also no mention of support for my colleague Carolyn Harris’ campaign on funding child burials, although I am pleased to say the Welsh Government has since announced it will scrap child burial fees in Wales.

I had the opportunity during the annual St David’s Day debate to talk about  positive developments in Newport and Severnside, including the new life in our city centre thanks to the hard work of Newport City Council. The Friars Walk development, which had 8 million people walk through it in 2016, has brought 1,500 new jobs, and attracted £120 million into the city centre. I also raised the issue that as the population grows in the areas of Caldicot, Rogiet, Undy and Magor, it is crucial that we have the infrastructure in place including a new station in Magor, for which a bid has been put in, and better capacity for the commuter services to Bristol and Cardiff.  Here’s a link to my speech in which I also talked about Police cuts, the impact of which is raised by many constituents.

Constituents have also been in touch with their experiences of the PIP process.  I have raised this in debate here  and in a debate by my neighbour Nick Thomas–Symonds about early onset Parkinsons.   I was also keen to talk in a debate on Universal Credit on behalf of people who had contacted me, but it has been rescheduled until after Easter as it was due to take place on the day of the terrorist attack. Please do get in touch if you want to discuss how the Universal Credit changes or the PIP process has affected you.

I co-hosted an event in Parliament for AB InBev, a major employer in Magor who as well as brewing Becks, Stella, Boddingtons and Corona in our constituency are also developing new lower strength beers such as Bud Light. I spoke about their campaign in a Beer duty debate here. 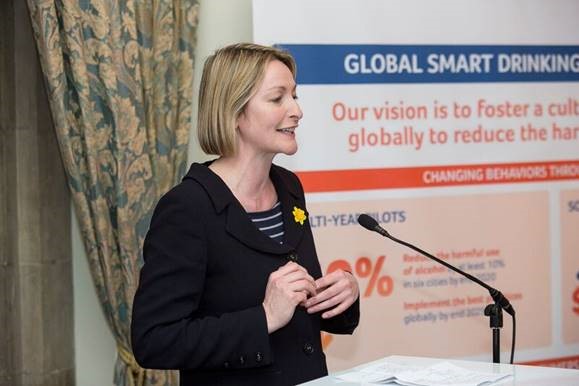 This month I supported my neighbour Paul Flynn’s debate on Badger culling pointing out the more humane and more effective approach of the Welsh Government and a debate on the Ivory trade.  You can read more here and here.

Amongst the contributions and questions I have raised are maternity discrimination, defence and reservists, praised the IPO Newport office staff, and spoken up for the WASPI women. I have tabled written questions on subjects ranging from the use of UK Steel in procurement, to the Severn crossing, foreign affairs, and supported events hosted by Fair Trade Wales, Marie Curie, and World Cancer Day.

This month I have attended local community events such as the Lliswerry Primary School Eisteddfod, Newport Rugby Club Hall of Fame Awards, Newport & district youth football, and County in the Community activity days.  I’ve also visited local businesses including Llanwern steel works; supported a meeting discussing rail issues in Caldicot; attended church services and a mosque open day, and held a number of surgeries across the constituency including Magor, Caldicot and Lliswerry in addition to my regular surgeries in Clarence House.

My next surgery dates are:

You can find always find my surgery dates on my website.  Please call if you’d like an appointment.  Alternatively you can email me on jessica.morden.mp@parliament.uk

It is always a great pleasure to welcome groups from the constituency to visit Parliament. Past visitors include St Julians School, Newport Mind and Glan Usk Primary School. If you would like to find out about how to organise a visit the Houses of Parliament please ring my office on 01633 841725.