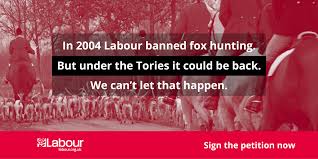 Thank you to those who have contacted me about animal welfare issues -; I know this is important to many in this Election.

I have regularly raised animal welfare issues with Ministers in my time as your MP, most recently speaking in debates on the ivory trade and the badger cull.

I believe we have a moral duty to treat the animals we share our planet with in a humane and compassionate way.  No other major political party has such a proven track record of decisive action for animals at home, on farms and in the wild.

The last Labour Government achieved much to end the cruel and unnecessary suffering of animals with the banning of hunting with dogs, deer hunting, hare coursing, securing an end to cosmetic testing on animals, banning fur farming and introducing the Animal Welfare Act 2006.

This is a legacy that we are proud of and one which we believe shows that we can be trusted on animal welfare.  You may find it helpful to see some of the commitments which I support.

Ten years ago the Labour Party ended the cruel practice of hunting with dogs, because we believe that causing defenceless animals to suffer in the name of sport has no place in a civilised society. You will have seen in this Election that Theresa May has pledged a vote to repeal the ban and she said she is in favour of this cruel blood sport.  If re-elected I will vote to keep the ban. You can sign Labour’s petition here.

Read my recent speech on the Ivory Trade in the House of Commons, reiterating my support for a total ban on ivory trading (something Labour has pledged in our manifesto).  Theresa May has dropped any mention of a ban on the trade of ivory from the Tories General Election manifesto.

Badger culls are supposed to reduce Bovine TB but experts say the Tories’ culls will make the problem worse.  Following repeated failures to meet deadlines and targets, the Government is effectively pursing an unscientific mass cull with no rigorous monitoring or evaluation.  Labour will end this and develop a better plan to eradicate Bovine TB, learning the lessons from the Welsh Government where a vaccination programme is already in place.  You can read my contributions to Paul Flynn’s debate this year on the inhumane badger culls here.

Travelling circuses are no place for wild animals.  Being moved from place to place in cramped and substandard enclosures, forced training and performance, loud noises and crowds of people are the unavoidable distressing realities for animals in circuses.  Despite promising to ban the use of wild animals in travelling circuses, the Tory Government has failed to do so.  We will ban this cruel practice.

5.      Improve the protection of domestic animals

At present we have ineffective regulation, a lack of information for pet owners and a failure to deal with irresponsible and cruel breeding practices.  Labour will prohibit the third party sale of puppies and increase the maximum sentence for those convicted of animal cruelty.

The humane treatment of animals should be a benchmark for any civilised society.  National governments have a duty to work together to prevent cruelty around the world.  It’s important that we push to prevent the poaching and near extinction of endangered species such as elephants, rhinos and tigers.

You can read more about Labour’s pledges on animal welfare here.