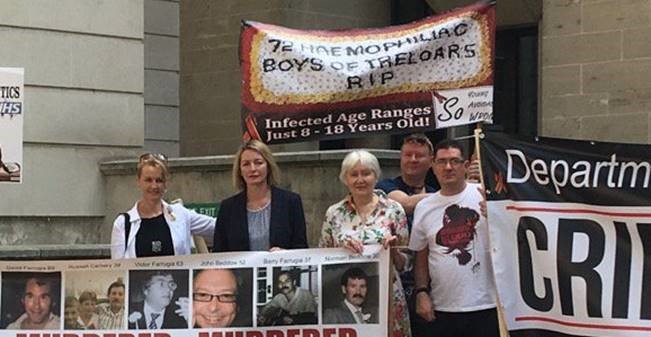 I’m backing the call for a public inquiry into the contaminated blood scandal. It’s time for the Government to act to bring about justice for the victims of a national disgrace.

During the 1970s and 1980s over 4,500 people with haemophilia were infected with a range of blood-borne viruses including Hepatitis C and HIV via their treatment with contaminated blood products.

The Tainted Blood campaign estimate that over 2,000 people died as a result of receiving contaminated blo…od. Among those infected was seven-year old Colin Smith from Newport, who died of Aids in 1990 after being treated with NHS blood products.

I joined campaigners – including representatives from Haemophilia Wales – at their protest outside the Department of Health last week alongside Bridgend MP Madeleine Moon.

Many campaigners accuse authorities of a cover-up, and claim that government bodies, pharmaceutical companies and senior clinicians may have been aware of the risks posed by the products that were used.

The families of those who lost loved ones -; including my constituents the Smiths -; deserve proper compensation, and clear answers from the state. Justice will not be achieved until we have a proper, UK-wide public inquiry that will release all available official documentation on the scandal for public scrutiny, with a remit to consider failures in government policies and negligence by public bodies.