Contaminated Blood Inquiry to be set up

Yesterday, before an urgent debate on contaminated blood, the Government finally announced a Public Inquiry into what has been described as one of the worse treatment disasters in the NHS. I welcome this development for the families that have been affected in Newport East, who have campaigned relentlessly. Here’s my contribution on their behalf in yesterday’s debate.

“I want to speak in this debate on behalf of my constituents, Lin Ashcroft and the Smith family, victims of the contaminated blood scandal.

I congratulate my hon. Friend the Member for Oxford East (Annaliese Dodds) on an excellent maiden speech. She rightly highlighted the importance of the campaign and her local campaigners, and we look forward to hearing many more speeches from her. I also add to the tributes to my hon. Friend the Member for Kingston upon Hull North (Diana Johnson). We are having this debate because of her, and she has worked tirelessly on the issue with other hon. Members. She has a parliamentary life well spent on the issue, let alone all the other matters that she has campaigned on. But she has done this for the victims, and, in welcoming the Government’s announcement of a public inquiry today, I agree with her that it is so important that the families are at the heart of it. The inquiry has been a very long time coming; we failed this community many, many times, and they need to be at the heart of it and have confidence in it.

It is absolutely shameful that 45 years have passed since the first people were infected with HIV and hepatitis from NHS-supplied contaminated blood and blood products, yet we have still not got to the truth for the members of the community who are affected. They have been let down so often, but they still come here relentlessly, all these years later, to see Ministers and lobby MPs to fight for justice. I pay tribute to them for their strength. I remember a family telling me, not so long ago, that in the end they had to stop going to the funerals of the friends whom they had made as part of this campaign, because it had become too heartbreaking: there were just too many funerals to go to. I think that is really sad.

As the former Member of Parliament for Leigh said in his last speech in this place, there is plenty of new evidence that backs up what campaigners have known and felt in their bones for many years: that the risks posed by contaminated blood were known by the authorities and pharmaceutical companies at the time but it was still used; that people were used for testing and as guinea pigs; and that efforts were made to suppress that truth. Let us remember that these were people who went to the NHS for treatment and were infected by blood provided by the NHS-provided by the state. They have had to fight for years for that to be acknowledged, and no fault has ever been admitted by either the Government or the pharmaceutical companies that supplied the contaminated blood products. It was said that that was because no one could have known about the problem at the time but, as a result of the work of campaigners, Members and the media, we now have that new evidence that risks were known. The inquiry must start now, so that we can get to the truth once and for all.?
As we heard from my hon. Friend the Member for Kingston upon Hull North, more than 2,400 people have died and the lives of thousands more have been wrecked. I want to talk about just one of those people, Colin Smith from Newport in my constituency. He was one of the youngest victims of the contaminated blood scandal, and what happened to him illustrates just why the inquiry cannot come quickly enough.

Colin went into hospital in 1983 when he was eight months old with a minor ear condition. As a haemophiliac he received factor VIII, which the family learnt, following a freedom of information request, had come from a batch from a prison in Arkansas. He spent his short life fighting illness. He died, aged seven, of AIDS and hepatitis C in 1990. The family did not know he had hepatitis C until three years after his death: it had been kept secret, as so much was kept hidden. I hope that that will be examined in the inquiry, because people like Haydn Lewis, who was mentioned earlier by my hon. Friend the Member for Cardiff Central (Jo Stevens), had to battle and battle to obtain such information.

Colin died aged seven in his mum’s arms, weighing about the same as a baby. I have told his story before in the Chamber. It is a heartbreaking story, but telling such stories is an important reminder of why we are here today. It is also an important reason for having a public inquiry. We now know something that Colin’s family knew in their hearts, I think, for many years, but have since outlined on “Panorama” and in Private Eye. One of the recently unearthed letters written by Colin’s haemophilia specialist in 1983 recorded that, following his minor incident, “without any evidence of intracranial bleeding the child was still given factor 8”. The specialist added that “all these materials carry the risk of hepatitis but this is something haemophiliacs have to accept”.

He said that he would keep Colin under “close observation as months go by”. Six years later, after Colin had died, the same specialist wrote to pharmaceutical companies saying that he could not supply any more “samples” because Colin was no longer at his facility. Colin’s family were not aware of that until much later. That and other evidence needs to be put before the public inquiry so that witnesses can be called under oath and all documents can be disclosed, because it indicates that the risks of using this blood-supplied by profit-making American companies-were known in 1980 or earlier, three years before it was given to Colin.

Colin’s tribute on the Tainted Blood website says: “Thousands of people, like Colin didn’t make it this far. He never had the chance to join the cubs, play football for his school, have a girlfriend, go travelling or get marriedInstead, his short life was filled with hospitals, doctors and illness. He was just a little boy, but a very special one who we, at TB, always keep in mind as we campaign.”

He is in my mind every day, because when at home in my constituency I often drive past the Smith’s house, with my eight-year-old son sat in the car next to me, and I imagine how I would feel if this had happened to me. So I just say this to the Minister: would I have been happy if there was a public apology and would I have been happy with the limited financial support that people felt they had to beg for, or would I want to ?finally get to the truth? Nothing can bring back Colin and others, but we can at least have a public inquiry that gets this right. We need to get it right this time, because Colin’s family and others have been through so much over the years that we cannot let them down again.” 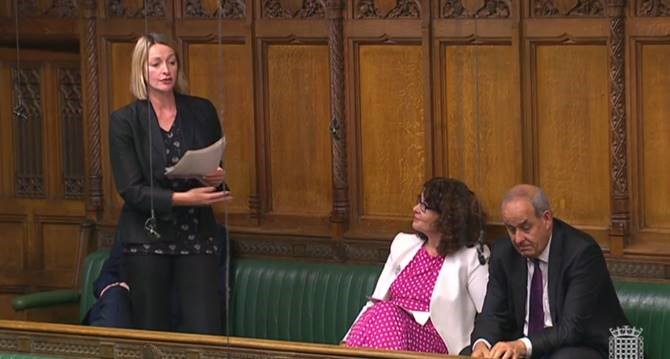