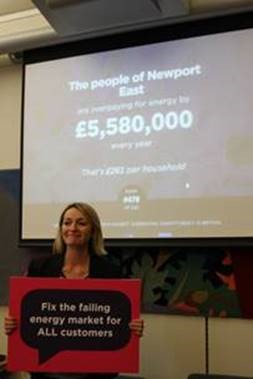 New statistics from Octopus Energy show that over 21,000 families in Newport East are over-paying on their energy bills by around £5.6million a year -; the equivalent of £261 per household.

All three of the largest parliamentary parties called for a price cap in their manifestos, but current government plans would only target a fraction of those on rip-off tariffs. An inquiry by the Competition and Markets Authority found that energy customers were paying on average £1.4 billion a year more than would be the case in a competitive market.

A cross-party group of MPs has now written to the Government urging it to make sure all consumers benefit from fair energy prices.

It’s worrying to hear how many families in Newport East are being ripped off, and much more needs to be done to protect those who are struggling to pay their energy bills. The energy market in the UK -; where the dominance of the ‘Big Six’ stifles competition -; needs to be reformed.