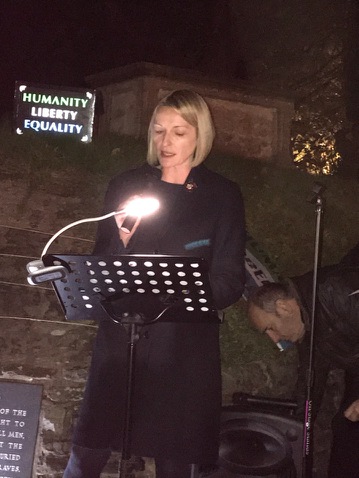 It was an honour to give a reading at the annual Chartist Commemoration evening at St Woolos Cathedral churchyard on Saturday. Thanks to all who organised the event.

It’s so important that we remember those who gave their lives for the democratic freedoms we enjoy today.

Buried at once in four graves, ten men, names unknown, shot by a party of the 45th Regiment of Foot in a Chartist insurrection before the Westgate Inn. November 4th 1839 – Register of burials for the Parish of St. Woolos, Newport 1839

In the aftermath of the Rising, the authorities took possession of nine bodies, five from within the Westgate Inn and four from outside the building. Eventually, ten bodies were placed in the stables of the Westgate, with two of the victims being quickly identified. One was a deserter of the 29th Regiment of Foot, the other was William Griffiths from Aberdare. Very soon, George Shell of Pontypool, and Abraham Thomas were also named.

It is certain that many others were also killed in the attack on the Westgate. The Monmouthshire Merlin confidently asserted that, of ‘the twenty-two bodies, which have up to this time been discovered, not one has been identified as belonging to Newport’.

As many as three bodies, however, were found around Newport itself. Indeed, the policeman Moses Scard claimed that he had seen sixteen bodies in the town. One Chartist had expired at Pillgwenlly, while David Morgan, from Tredegar, died in the Friars’ Field.

The evidence of Benjamin Richards provides a vivid picture of this,
‘ I did sleep that night in the public house on the left hand of the bridge  I met David Morgan’s wife above Risca coming down  (I was told) to come down along  to Newport, that David (her husband) was killed  it was Friars field and there he was lying on the table laid out. I believe that the name of the man was John Hughes the landlord of it. I wasn’t sure of it, and they begged of me to stop there to try to have his body up to Tredegar to be buried. I did stop there till Thursday’.

A very basic inquest, conducted by the Coroner, William Brewer, on Wednesday 6th November, provides us with little detail of the identities of the Chartist dead. Only Shell is listed by name, ‘Shot in the act of Rebellion by some person unknown in defence of himself’. The other nine men are each described as ‘Man Unknown’.

On Thursday 7th November 1839 the ten bodies were laid to rest in unmarked graves, in the St. Woolos churchyard at the north side of St. Mary’s chapel.
These events were openly discussed in the local newspapers. On Saturday November 9th 1839, The Monmouthshire Merlin reported that,
‘The nine slain Chartists that lay for some days in the stable of the Westgate, were buried on Thursday (7th November), in Stow churchyard, in three graves, containing three each. The passage of the bodies created a great sensation. The military accompanied them to their graves.We understand that it is the intention of several influential gentlemen of this town and neighbourhood, to set on foot a subscription for the purpose of presenting to the Mayor, Thomas Phillips, junior, Esq., a testimonial of their esteem and admiration of his conduct, on the late eventful occasion. Mr Powell, of the Gaer, mentioned the subject at the meeting of Canal Directors this week. Copy of two cards found on the bodies of two of the unfortunate rioters, one of which was printed on a blue card. On the back of the first was written, Wm. Griffiths, No. 5A; and on the reverse the following was printed: The Working Men’s Association for benefitting, politically, socially, and morally, the useful classes. Motto – The man who evades his share of useful labour, diminishes the public wealth, and throws his own burthen on his neighbour’.

A week later, the Merlin added more detail to its account of the Chartist dead,
‘All who are yet known are the following: – Shell, cabinet-maker of Pontypool, a lad of about 19, who was the first to introduce Chartism into that town; Isaac Thomas, of Nantyglo, William Griffiths, of Merthyr, and (William) Evans, of Tredegar, miners; and a supposed deserter from the 29th, who were recently stationed in Newport’.

These men should not be forgotten, and future historical research will surely reveal more both of their lives, and their faith in the Chartist cause. The thoughts of George Shell, sent to his parents on the eve of the Rising, should stand forever as their epitaph,
‘I shall this night be engaged in a struggle for freedom and, should it please God to spare my life, I shall see you soon; but if not, grieve not for me, I shall fall in a noble cause’.