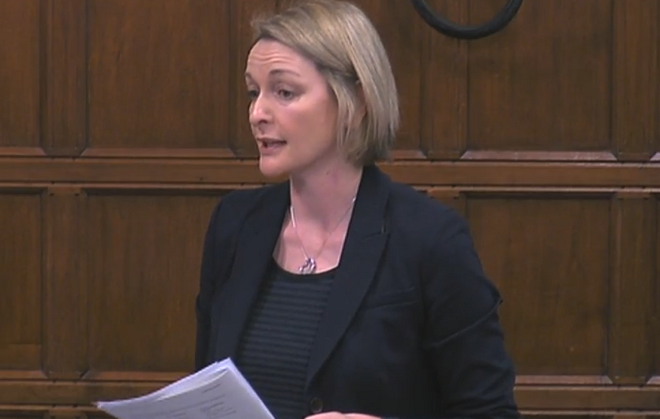 I spoke in today’s Westminster Hall backbench business debate on a sector deal for the steel industry.

Here’s my contribution to the debate in full:

I, too, congratulate my hon. Friend the Member for Aberavon (Stephen Kinnock) on securing the debate. I fully support the excellent case that he made for a steel sector deal. He rightly reiterated the policy asks and the fact that speed is of the essence. I wholeheartedly agree with that. My constituency is just down the M4 from his, and the social importance of steel is crucial to communities in my constituency too. Hundreds of people rely directly or indirectly-there are three or more jobs in the local economy for every steel job-on the steel industry. These are good jobs-skilled and relatively well paid jobs-in parts of the country, such as Wales, where that is not always the case. There is huge pride in producing steel. In areas such as mine, there is a real passion for and commitment to the steel industry, which is why all of us in the Chamber have spoken in many debates over the past few years calling on the UK Government to take more action to save our industry. However, on issues such as energy costs, those calls, as my hon. Friend said, have sadly gone unheeded up to now.

During these very hard times for steel, we should recognise, as my hon. Friend said, that the workforce, with their unions, have made huge sacrifices and done all they can to help our industry-most recently, through the painful changes to pensions. Let me also mention, as a Welsh Member of Parliament, the Welsh Government, who have done all they can with the powers and tools that they have in Wales to help. That includes the active work of Ministers such as Ken Skates, the Welsh Assembly Government’s Cabinet Secretary for Economy and Transport, who has supported the industry through Welsh public sector infrastructure and construction projects.

However, we do need more UK Government action, and faster. It is true that we have had warm words, but we need more action. The steel sector deal proposal has been put together by the existing six steel companies in the UK, coming together with the unions to look at ways of addressing the challenges collectively. Those individual companies have made specific commitments on jobs, investment, expanded capacity and an increase in innovation activity within the sector.

Some of the companies are in my constituency. There are Tata’s plants at Llanwern and Orb and the relatively new entrant Liberty, which is expanding fast. Those two companies were among the six involved in drawing up the steel sector deal proposal. With Tata’s Llanwern Zodiac plant in Newport East, the investment by the company in the auto-finishing line, and Orb’s electrical steel capabilities, there is a real opportunity for the UK to establish itself as one of the foremost suppliers of steel to the automotive industry, especially for electric cars. We therefore welcome the Government’s automotive sector deal conversations and their ambition to increase domestic content to 50% in British-made vehicles, but we in Newport are acutely aware that we need a thriving, competitive steel industry to do that, which is why a sector deal for steel is needed.

The GFG Alliance, which owns Liberty Steel, which also has a base in Newport East, has announced plans to create a total of 5 million tonnes of low-carbon steelmaking capacity during the next five years as part of a drive to develop a green and competitive future for manufacturing in the UK. That would equate to half the steel made in Britain at present. Currently, the UK exports more of its scrap for processing abroad than any other developed country, so Liberty’s aim is to recycle a large proportion of the 7.2 million tonnes a year of scrap steel here in the UK. That low-carbon secondary steel production would displace much of the 7 million tonnes a year of raw steel currently imported and is a huge opportunity for the country to drive clean growth by making low-carbon steel at home.

There is great ambition in the steel industry in my constituency, despite all the difficulties faced by the steel sector in recent years. However, although demand for steel is up, production has fallen and many of the underlying causes of the recent crisis are still there. Tata and Liberty in my constituency show what ambition is out there, but we need Government interventions to ensure that our innovation can keep pace with our international competitors. That is why we repeat and repeat the policy asks. That means Government action on energy prices-the most important intervention that the Government could make. As my hon. Friend said, UK plants currently pay more than 50% more than their German and French counterparts. It means action on the business rate regime. These companies are investing and want to invest more. They want to work with the Government to unlock further investment. For the steel industry to flourish, they need a route to market that includes things such as UK steel for infrastructure projects, help with access to finance and a future steel challenge fund. Addressing the barriers through a sector deal will help to unlock investment. I mentioned this a moment ago, but we also need to continue to see more commitment on procurement, including in subsidised energy projects. As a South Walian Member, I point out that we are still awaiting a decision on the Swansea Bay tidal lagoon.

The project has huge potential, not only for Swansea bay but for other areas of Wales-there is the potential for tidal lagoons in places such as Newport-so we must keep pressing the Government. We do not understand why the decision has not been made yet.

There has obviously been disappointment in the steel sector that its own proposal for a sector deal was not among those being talked about, especially given that, as my right hon. Friend the Member for Wentworth and Dearne (John Healey) said, discussions have been ongoing since the crisis in 2015-16, when the Secretary of State invited the sector to work with him to come up with a vision for a modern, sustainable steel sector. We look forward to hearing from the Minister today about what she can do to work with the industry and all of us to ensure a sustainable future for steel.