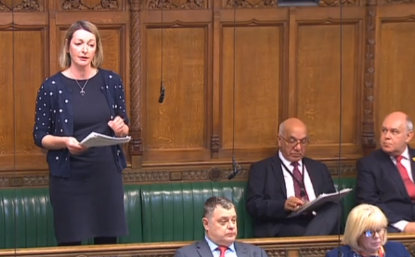 In Parliament today I renewed my call on the UK Government to make a decision on the Swansea Bay Tidal Lagoon.

The UK Government has still not announced whether it will back a ‘pathfinder’ lagoon for Swansea Bay, despite a Government-commissioned review led by Charles Hendry -; published in January 2017 -; recommending that Ministers give the project the go-ahead.

In a question to the Secretary of State for Business, Energy and Industrial Strategy, I said “Can I say to the Minister that a decision on the Swansea Bay Tidal Lagoon is important for Wales a whole? There is huge potential for future lagoons around Newport following the Swansea pathfinder, and it’s really important that we don’t pass these opportunities up.”

The Secretary of State, Greg Clark MP, responded by saying that his department was ‘exploring all possibilities and recognising constraints’ associated with the project, and he was engaged in discussions with First Minister Carwyn Jones.