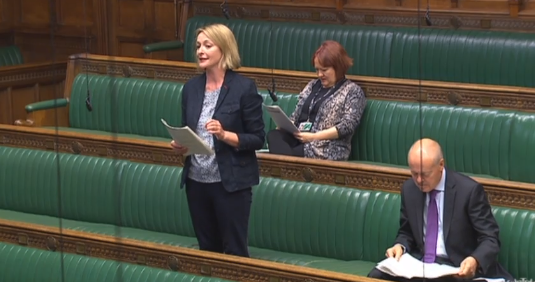 Today in Parliament I called on Environment Secretary Michael Gove to bring forward action on a plastic deposit return scheme.

In March the Department for Environment, Food and Rural Affairs (Defra) announced it was consulting on introducing a deposit return scheme to increase recycling rates and slash the amount of waste polluting land and seas around Britain. The UK Government estimates that British consumers go through an estimated 13 billion plastic drinks bottles a year, but more than three billion are incinerated, sent to landfill or left to pollute our streets, countryside and marine environment.

In Defra questions this morning, I asked if the Environment Secretary would be making representations to the Treasury to fund the introduction of a deposit return scheme. I said: “Tomorrow a team from AB InBev brewery in Magor and Keep Wales Tidy will be out again cleaning up the shores of the Severn Estuary, which highlights the very urgent action that’s needed to protect our environment from the devastating impact of plastic pollution. Can the Minister confirm whether he’s got Treasury backing for a deposit return scheme, and when will we see some action?”

Michael Gove responded by confirming that he had held talks with the Treasury on the issue, and had also had collaborative discussions with the Welsh and Scottish Governments on a deposit return scheme.